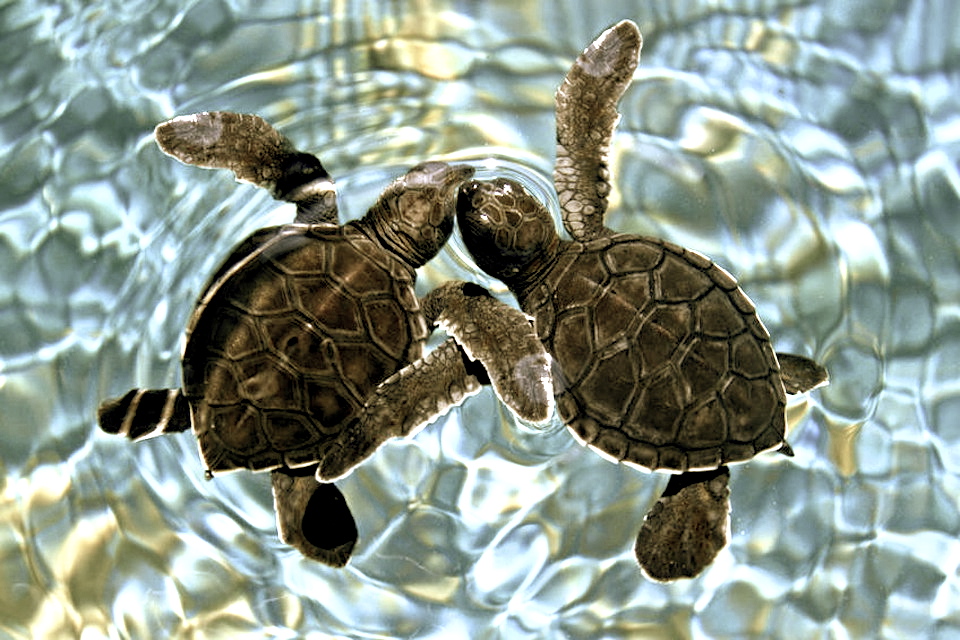 There are seven different species of sea turtles that live in our oceans: the Flatback, Green Turtle, Hawksbill, Loggerhead, Leatherback, Kemp’s Ridley and Olive Ridley. Little to large, they range in size from about 2 to 5 feet long, with massive Leatherbacks at up to 7 feet long. Their diets vary and include jellyfish (Leatherbacks), clams and sea urchins (Loggerheads), seagrass (Green Turtle), crabs and crustaceans (Flatback, Kemp and Olive Ridley), and sponges (Hawksbill). They like their water warm—you’ll find them only in temperate waters throughout the world.

So why are sea turtles endangered? Mostly because of man. They are hunted for their eggs, meat, skin and shells. Their habitats are being destroyed, and their eggs are often collected illegally for food. Global warming and pollution are also factors in their decreased population. And sometimes they get caught in fishing nets and drown.

So what can we do to help? Reduce the amount of garbage we produce (especially plastics), clean up trash on the beach; avoid sea turtle nesting areas; and reduce the amount of chemicals we use, which wash into coastal waters and kill plants and animals. To learn more about sea turtles, check out the World Wildlife Fund here.

– Green sea turtles can stay under water for as long as five hours. How? Their heart rate slows to conserve oxygen with as much as nine minutes between heartbeats.

– An adult leatherback sea turtle is usually longer than an average-sized man (6 to 7 feet long).

– Most sea turtles migrate hundreds and even thousands of miles between their feeding grounds and the beaches where they nest.

– They’re ancient, literally. Sea turtles can live up to 100 years or more, making them one of the oldest living animals, and they have been around for 110 million years –– since the time of the dinosaurs. Now that’s old.